What’s the difference between psychology and psychiatry? And why you should care. 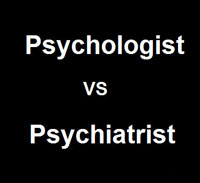 > Fields concerned with understanding and treating disorders of the mind.
> Both address diagnosis, case formulation, treatment planning, and treatment delivery.
> Psychiatrists and (most) psychologists are both addressed as “doctor.”
> Both fields are actively engaged in research in a range of areas of shared interest. It is not unusual, for example, to see psychologists publishing in psychiatric journals.

Because of these similarities, it is not unusual for people to seek the services of either a psychiatrist or a psychologist for their difficulties. But before you toss a coin to choose, you need to know about our differences. In probably the majority of cases, those differences will impact the care you receive in ways that matter to you.

Are you a person or a disease? Psychiatrists come from a background in medicine, and are naturally taught to conceptualize life’s problems in a medical framework, as diseases. The diagnosis is their understanding of the problem, and the treatment for patients’ diseases, most often, is medicine. While psychotherapy used to be a mainstay of both psychologists and psychiatrists, it is rare to find a psychiatrist these days who received much training in therapy, and rarer still to find one who practices it well.

Psychologists come from a psychology background. Their broad-based grounding in the many areas of human behavior serves as the foundation for specialization in such areas as abnormal behavior and its treatment. When conceptualizing patient problems, psychologists may use formal diagnosis, but only as the starting point, rather than the end-point of their deeper and broader understanding of the individual with his or her problems, strengths and vulnerabilities. Psychologists frequently use standardized psychological tests to greatly aid in problem assessment and treatment planning. While the interview method is indispensable, it is limited by fundamental problems, such as with it’s sensitivity, reliability and validity.

Because psychologists are not physicians, they are not trained or qualified to administer medication. Because psychiatrists are trained as medical practitioners, not scientists, they do not have the psychometric background to understand and interpret standardized tests like the MMPI, Rorschach Inkblot Test, or tests of intelligence and cognitive functioning such as the WAIS that can vastly improve reliable and valid problem assessment and treatment planning.

A pill for every ill? Psychiatric medicines are cheap, accessible, and with ever-fewer side effects, easier to swallow now than ever. For these reasons, it is understandable that medication has become a first-line treatment approach. Unfortunately, pharmacotherapy has been vastly over-sold based on promises it can’t fulfill. Its limitations, however, become serious problems for patients when medication is so often the only line of treatment considered by physicians. The majority of clients I’ve seen (over 90%) had been on medication prior to seeing me. Most had been tried on multiple drugs and numerous dosages over periods ranging from many months to several years. All were dissatisfied. Faced with inadequate treatment outcomes, most physicians offered their patients yet more medicine, or counseled them to lower their expectations. Only the rare exception has suggested their patients consider psychotherapy. The majority of clients tumble to the idea of psychotherapy on their own, or from sources other than their trusted family doctor.

An interesting trend I have seen recently is the increasing number of people who are not interested in taking medicine. For some, it is a lack or loss of blind faith in medicine. For others, it is a view that psychotropic medications, even if effective, can only mask symptoms without resolving the real underlying issues. Still others view taking medicine as a form of submission where any benefits come at the heavy cost of giving up hope that they can do something to help themselves. For them, psychotherapy is preferred as a mutually collaborative process that empowers them as the agent of change in their own life. I am sympathetic to all of these concerns.

Thanks for adding the article to the social bookmarks

Dr. Brenton Crowhurst, a psychotherapist and psychologist in Calgary, can move you beyond your personal problems and life difficulties so that you can live the happy, fulfilling life that you deserve. Read more about Dr. Crowhurst on his bio page.